For as long as I can remember, I have believed heaven looks a lot like 200 acres in West Tennessee.

My grandmother died in October. She was 86 and spent the last sixth of her life being almost exclusively in a doctor’s office or on her farm. It sprawls down a gravel driveway in Tipton County some 30 miles north of Memphis, sitting just off Bucksnort Road, a real name her 91-year-old husband says still gets a snicker at the DMV. He would know:  he’s still driving. Every morning to Burger King to drink coffee with his friends, every afternoon to a local pharmacy to play dominoes. The coffee comes in an old promotional mug promising free refills for the rest of the month. The good people at Burger King never stopped filling it up, giving that 5 AM crew what has to be thousands of dollars in free coffee by now. The dominoes are large print, and when he downplays how seriously he takes them he is trying to hustle you.

When she died six months after a stroke and 15 years after her health first started to turn, he came to my parents’ house in Knoxville for Christmas. It was the first time he’d been outside Tipton or Shelby County in 20 years. When the dominoes came out, he told my sister to call her bookie.

Moments like that make me smile because they remind me of a time when all of us were younger. My dad has no siblings and I’m the oldest of three; the firstborn of an only child creates a particularly potent relationship for both grandparent and grandchild.

Growing up I would spend weeks and later months on that farm in the summertime. When I was a kid, I thought it was heaven because it was a place where the word “no” didn’t seem to exist. Do you want to stay up late with your grandmother and watch Carson and Letterman even though you’re way, way too young to appreciate it? Do you want to get up a few hours later and fish with your grandfather? Do you want a burger and fries from Wendy’s but a Coke from McDonald’s because they have those Dream Team collectible cups and we’re only missing Stockton and Laettner?

My passion for sports flows from them through my dad and into my very blood. As West Tennessee Vol fans they hated Archie Manning almost as much as they loved his son. I think I might have always been a Celtics fan because that’s what tall, white, blonde-headed children of the 80’s gravitated towards if they played basketball. But my grandparents fed it with mail-ordered VHS highlight tapes from 1984-87. Even now during a particularly tense Boston playoff series I’ll hear the background music from those old videos floating around in my head.

And they both loved not just their favorite teams, but the sport itself. Going through her things after she died we found a $20 she won off my grandfather betting on Ty Detmer to win the Heisman in 1990. 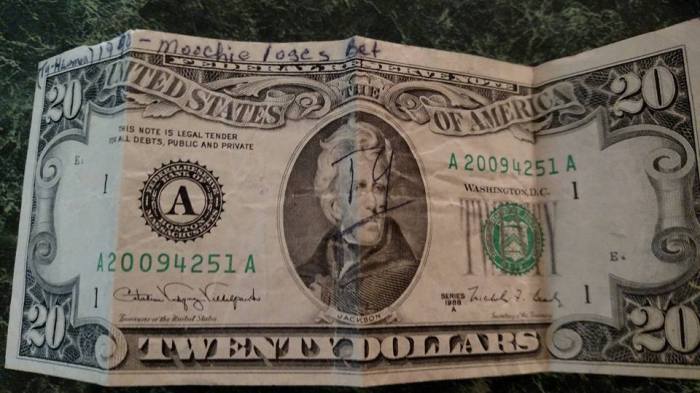 My grandfather has been “Moochie” since his school days because he was so good at stealing bases people would say, in what I suppose is that 1930’s way, “He’s mooched another one!” And I just found that out four weeks ago, driving him back to Tipton County after Christmas. I never much thought to ask; growing up I just figured that was his name. When my grandmother (Sara; Sasa to her grandchildren) would get really upset with him sometimes she’d call him by his first name and I’d get really confused as to who Lawrence was.

She taught me to play gin rummy and when I beat her was the first person I ever heard use the cuss words you get in real trouble for. But I didn’t beat her much.

The farm was a place where it felt like Sasa and Moochie could make anything happen. But despite what seemed like limitless options, we fell into a steady routine:  driving into Memphis on Mondays, Wednesdays, and Fridays. We’d either eat lunch at Western Sizzlin before going to the Putt-Putt off Summer Avenue, or go to Hickory Ridge Mall and eat at Chick-fil-A back before you could find one outside a mall. On the way back we’d stop at Blockbuster Video so I could rent another Nintendo or Super Nintendo game. And then we’d go to Seessel’s on Austin Peay Highway, a Memphis grocery chain.

I was too young to tell you what made Seessel’s unique. But I definitely remember when it closed. Of all the fun we had at places much more exciting to a child than a grocery store, the memory of its absence stands out. I think it was the first time in my young life when something was gone, and it wasn’t coming back. The first time I understood that particular no.

As we get older and the no’s of our lives become much more unavoidable, so too did my eschatological view of the farm change. When it wasn’t so much heaven because I always got what I wanted, it was still a place I could go when I was getting even less of what I wanted in my real life back home. The property stretches out for what seems like forever; there are places you can go on that farm where there are no sights or sounds to prove anyone but you exists. At first I wasn’t allowed to go that far back from the house, and then I was more afraid than curious. But as a young adult and especially a young pastor, those big empty spaces became one of its best features. You can disappear and then reappear in a sense, where it’s just you and God and you can ask your questions loud enough without having to worry with them being heard by anyone other than the audience you hope is listening. You can scream and you can be thankful. You can question and plead and once or twice use some of the cuss words your grandmother taught you. You can be lost. And you can be found.

To this day when I find myself in a particularly difficult set of days or when the seasons of my life are changing, I will find my way to the back half of that farm. Her death won’t change that. But what it has done is teach me more about how unique each of those seasons are in our lives.

When my wife and I went to see her at a rehabilitation facility in July, I drove Alex down all those old roads in Memphis. The Western Sizzlin closed years ago. The Putt-Putt is still open; we stopped and played a round. The Blockbuster Video is now Discount Wigs 2; I’m unaware of the location of Discount Wigs 1. And where Seessel’s once stood is now just an empty parking lot, a sign of both what once was and what might be.

You can’t get them back, those days. And I think that’s okay and maybe even good. Their memory makes me far more grateful than their absence makes me sad. In some ways we carry them forward:  I work hard to keep the Western Sizzlin in Athens open, and we still find our way to some form of miniature golf on almost all our vacations. But if we’re looking for pure replication, we’ll always be disappointed. It’s never those days anymore.

But those days are good at teaching me to value this one. And today, when I think of heaven, I think of both a place where my grandmother is winning the rummy tournament, and a kingdom Jesus says in some mysterious ways is available to us here and now. It breaks through in places like the farm and, more than that, in the people we get to share those days with, especially the people close enough to transition from one season of our lives to the next with us. But it is available – at hand – on this day too. Teaching us to be thankful for what has been and to look forward to what’s ahead, but never at the expense of the present moment.

11 thoughts on “Moochie and Sasa”